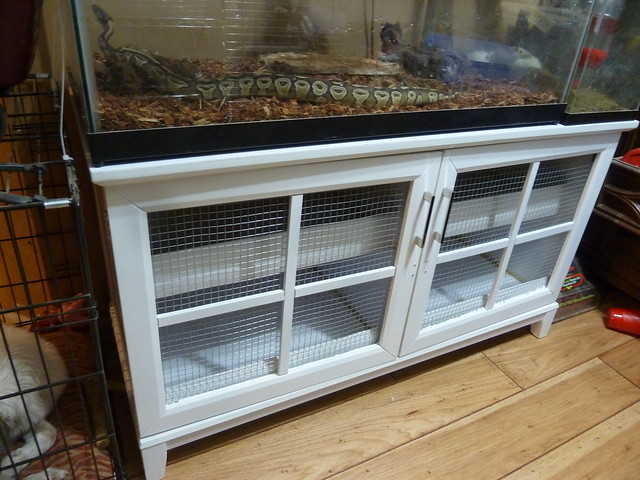 New Rattie Cage! by CSBeck, on Flickr
I bought the cabinet at Christmas Tree Shop for $80, replaced the back with a piece of hardboard I sprayed with vehicle enamel and indoor/outdoor spar urethane, sprayed the interior sides with the spar urethane, used silicone in all the edges (to keep urine from seeping around edges), siliconed on some vinyl floor trim as lips to keep bedding in, and replaced the glass with 1/2" hardware cloth

The hardware cloth doubles as ventilation and the ladder between levels

Oh very nice!! Wish I was that talented! Lol

Looks incredible! What morph of BP is that? Looks like a lesser or majove but its hard to tell in the photo! I have a normal, a pied, and an albino myself.

Love it! I must have bad luck, I've always looked in that store for furniture to use for mice or ratties but when I looked they were really expensive. It looks really nice

What spoiled brat rats! I want it!

Christine, it was actually really easy! Time consuming, but easy! just took all the pieces outside before I assembled it to spray it with the urethane and stuff...followed the directions to put it together, took out the glass and stapled on the hardware cloth, used my finger to spread the silicone stuff around all the edges...the only thing that really required any skill was cutting the hardware cloth and the edging to make sure it was the right size

Thanks guys! I'm really happy with how it turned out...now just have to make sure the ratties don't destroy it...lol It should be fine though...I have a cage from a china cabinet i've had for like a year that's still in good shape

Candycorn, the bp is my male mojave who's about a year old

Next winter he'll be hooking up with my adult normal female! I should have some baby snakes some time before that though....our amazons definitely locked up a couple times and the female is quite large in the middle

This cage is awesome. I would love to make a cage like this. Do you have to worry about the rats chewing?

They chew a little on the edges, but I've had no real issues

And I'm gawking at the ball python because I've just realized how small mine are! (All still babies)