I don't usually make my location so incredibly broad but it looks like I'm the only Canadian...again! I have no idea where the Canadian mouse fanciers are.

Anyway, I'm 26, and though I had pairs of mice as a child, I fell in love with rats and stuck with them for the past decade. I still adore them but my lifestyle doesn't allow for enough time to devote to my rodents anymore. Mice seem like a great solution since I've noticed they really enjoy each other's company (females, of course). I said goodbye to my last rat last week. I'm sure I'll have them again in the future, just not now!

I'm a university student studying biology and share my life with my boyfriend, Golden Retriever, and cat. I took in three mice from a fellow student who tried to sneak hers into her dorm and failed. That's what triggered the memory! Despite poor care, they're all very sweet ladies (though one died last month). Mice (non-frozen) are very hard to come by in my city so when I saw our pet stores stock up with a litter I grabbed a buck and doe. It's been at least ten years since I've seen a pet store carry mice. That's what prompted my decision to explore breeding. I'd like to try breeding a litter (or two, if that goes well) and have been reading rather intensely in the past month, refreshing my mouse care memory and learning about genetics with the help of knowledgeable folks like yourself.

I'm still in the planning stage as although I've determined I don't have the stomach to cull a healthy mouse, I don't mind finding either a local wildlife centre (if they'll ever email me back) or a responsible reptile owner who will euthanize humanely. I doubt I'll ever become a breeder, particularly without any known breeders nearby to get good show types from, but still want to do everything correctly. I understand in the mouse world there's no strict right or wrong which is a refreshing change (remember I come from the rat world!).

(pictured at 20g, still growing and still skittish)
She's actually satin, as it turns out, which I completely didn't notice until seeing her next to my other two girls!

I have the two older ladies from that student: 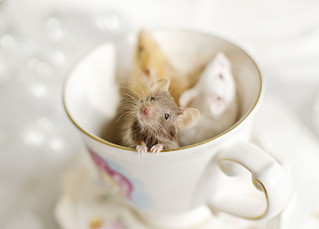 Three Little Mice Who Sat In a Cup by princessinboots, on Flickr

I'd love to breed them for their sweet and calm dispositions but I don't know how old they are for certain, and I've had them since November so that rules out that option! (the PEW is no longer with me)

So I'm still in the waiting stage. I need a place for the baby bucks, and I need Tully to trust me a little more than she does. Mrs. Beach referred me here while weighing her daily (she was a little confusing with her growth curve!) and that's helped a lot with her handling.

Welcome to the forum, there are a lot of knowledgeable breeders on here that can help with almost all questions regarding mice

I was going for bio and then switched to web design just because of the length of schooling. Your mice are really cute, I love the photos! I hope mice become more popular where you are located too, mice make great pets and little furry friends

Welcome to the group!

Welcome!! I agree with Love2Read, you take gorgeous photos of your mice!

Welcome! Where are you in Canada. I'm in NY near Niagara Falls.

Thanks so much for the welcomes! And thanks about the photos.

The first two were with my phone - I really need to make them model for me. (and yeah Tully seems to have wheel tail despite having a hamster wheel)

Ah yeah! You're not too far!

I wish I had a car - it'd be wonderful to have a mouse fancier nearby!

well if i ever head out your way, i'll be sure to let you know!