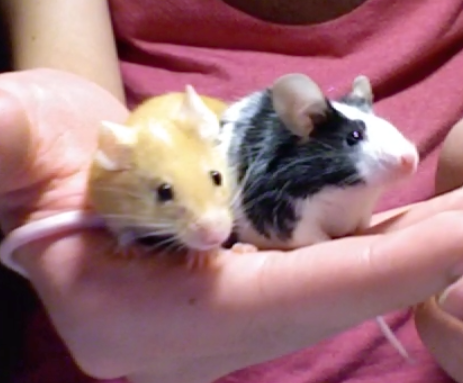 Recently I got my hands on two satin does, which I named Chubby (the black and white one) and Monet (the Champagne one). They often bicker with each other but all in all get along fairly well.

Monet is a jittery paranoid little girl, and I don't think she's been handled very much in the past for she won't even let my hand come 5 inches near her. I hope in my care, she'll get more used to getting touched. Monet also always pushes Chubby around, hogging the wheel and stealing the food. Chubby is a timid but curious girl, because at first she was just as jumpy as Monet, but eventually started to climb into my hand in her own accord. Very cool.
Monet and Chubby also have a tendency to pee while running on the no sound wheel, which is plastic. It was sticky and gross and smelled horribly like urine by the third day, I had to wipe it down using antibacterial wipes(which I followed with a wet paper towel). I have a feeling I'll need to change the bedding much more frequently than my hamster.
Other than that, looking forward to bonding further with my new mice! 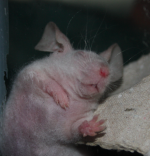 They are very cute!

FYI, Monet's color is called recessive yellow. Chubby is a pied black. I love her markings!

Ohh, that's cool! Thanks for the info and compliment!