I wanted to get a small flock of chickens this year, for the first time ever in my life. I've been looking all over and found a good breeder for my Barred Rocks and Easter Eggers that will be ready in three weeks, I am still looking for Silkies. I hadn't decided on any other varieties.

Today, at my local feed store, the very last pullets from the very last shipment...I looked at what they were and they were Salmon Faverolles!!! This is a very rare breed! I got three. I am very excited! They are VERY friendly and I have a favorite snuggler already!!!

http://www.mypetchicken.com/chicken-breeds/Faverolles-B47.aspx#
Here are the adult hens.

This is what my little girls look like!
I am very excited! They are a French breed, notice the cheek muff as well as the feathered feet with extra toes!

How nice!! The Faverolles is a bit less rare over here (belgium), but still you don't see them around often. Breeders like to keep them out of view for some reason

You can come get my silkie rooster if you'd like

Oh, my! I'm glad to hear you're getting started in chickens. They're really very fun! When we told friends we were wanting to hatch a few eggs, they told us we'd need a silkie, but our Serama has done a great job with her clutch of OEGB eggs. She's got a cute little trio of chicks right now, and as soon as they go on to their new homes, she'll be right back on a clutch again. The little guys aren't the best at egg production, but they're an awful lot snugglier than our Australorp, RIRs, and Wyandotte.

Chickens are awesome!!! I have a pair of seramas that live in a ferret cage in my living room!

I am so happy with these babies-It's so cool that there are other chicken people on here.

My husband is building a huge coop from free old pallets (we love to scrounge for free home improvement stuff) It has to have a roof because of an owl in the area and my dogs.

Dino-nice to hear someone is a bit more familiar with the breed!

Even though my husband does not want to, I am thinking of seeking out a rooster for perhaps biennial breedings...if this is a rare heritage breed perhaps we ought to be trying to keep it around. The roosters look fantastic!

One question though, I read a couple of resources that said these chickens either get picked on or beat up other varieties. Not every place says this. Should I still try to get my other breeds or did I just lock myself into having a one variety flock?

My friend and I have invested in fertile eggs to hatch. We have 3 roos and 2 hens, so a pair for each! I wish I could get the other roo to you! We have the incubator full right now, I think she has 6 more Fav eggs and I forget what else, but she is incubating show girls for me. I have 16 eggs so fingers crossed, they are set to start hatching Wed.

I have heard the Favs are timid, but so are several other kinds of chickens, so you could have a mixed flock if you didn't get any potentially aggressive hens.

I'm going to breed these and my showgirls so I will be keeping them in separate coops.

I have 2 pairs of Seramas as well.

As far as chickens picking on other varieties, I've found that unless there's a big group of one kind of chicken, and a single or pair of individuals who are a really different type (different size usually), they work it out. We've got the three rirs, the australorp, and a wyandotte who all get on just fine. But I'd never leave the OEGBs and the Serama in with them. The huge size difference wouldn't go over well.

Aww congrats!!!!
I have several chickens, but my faves are my d'uccles and Old English Game Bantams.
Since I show/breed my d'uccles and OEGBs, they are in their own pens, but the rest of the chickens I keep together with no probelms.

Theres a wonderful Silkie breeder near me.

Are there any farmer markets in your area?

Emma, are you on www.backyardchickens.com? If not, join, its a great place to find breeders!

The forum on backyardchickens is AMAZING!

I will NEED to check that out!!

Chickens are pretty neat. My boss got some about 6 months ago and I get fresh eggs every so often.

Unfortunately they also got a rooster and that sucker is mean lol.

I love chickens. I have had chickens for a few years now and they are adicting! I don't think I could ever live without them.

When I moved here from Arizona I brought my chickens and I'll be damned if I was giving up my birds so I keep them in their own coop in the garage.

But anyway, this rooster is a poop. He's very mean and will peck the crap out of you if you go near him! But for some reason, I can't make him dinner. There's just something about him. He looks at me and is like "Mom, hi, i love you. come here so i can peck you".

In the house he's good, no crowing or anything!

His name is Roo and is much bigger now

Now in the garage, I have a silkie something mixed rooster named pants (looks like he's wearing pants.


He crows but it's so low, you can't hear it over the traffic.
Pants

I have another silkie rooster who is all white and beautiful. He doesn't have a name yet.

I have a polish hen (?) I'm pretty sure she's a hen. She is a gold laced polish

Ironically, her name is Polish lol (unique, I know)

I also have a big black hen, a Rhode island red and several other hens I'm not sure of the breed.

I'll have to get a photo of this motley crew.

I love eggs, but I also love the ornamental birds.

Well guys! I added four new pullets to my flock to day! I went to go get three Easter Eggers today, and bribed the breeders out of a silver laced bantam hen. That is my favorite color!!! She is lovely.
We are building the outdoor pen so they should be able to get out of my living room during the day.

We are nearly done with the henhouse, building it out of salvaged pallets. 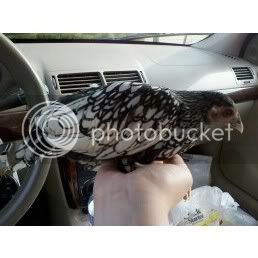 I am very very excited about this girl! Of course, she will not lay large enough eggs, but hey, she is beeautiful!

They can get so tame! I used to have a couple of sebrights and they would just fly on my arm for a treat

Be careful not to get them on your shoulder though, they will peck at your eyes!

What turned out to be the unexpected cockerel?

Similar topics
» How much space??