This is Rolympcia, Queen of the World and when I adopted her, I was told she was a splashed brindle. I hate to second guess her breeder, but at 4mos of age she just seems much too slim to be A^y. I will be breeding her soon, so eventually I will know for sure. But I'd really like to have a good idea of her color beforehand because I would pair her with different bucks based on whether she was brindle or not. Also, the photos are a very good approximation of her actual colors (shades of gray with a hint of brownishness in the markings). I don't know her c-dilutes, but she has black eyes. 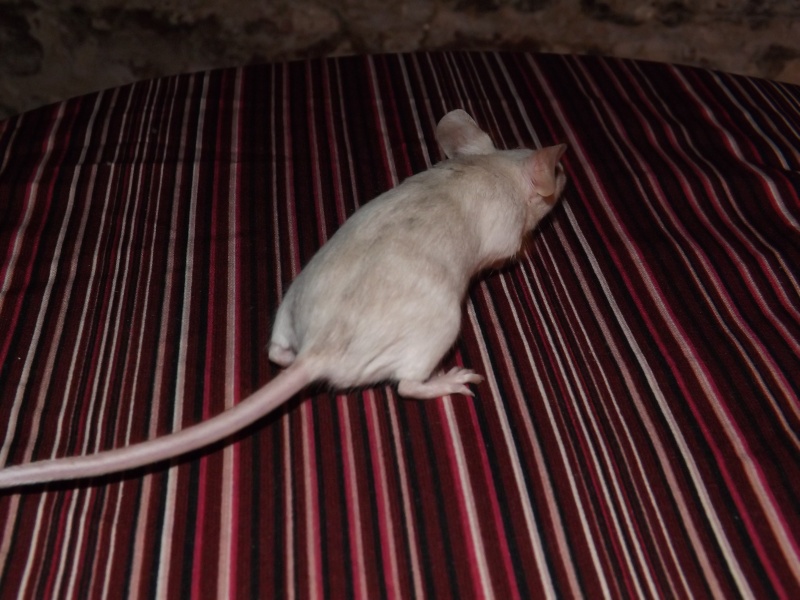 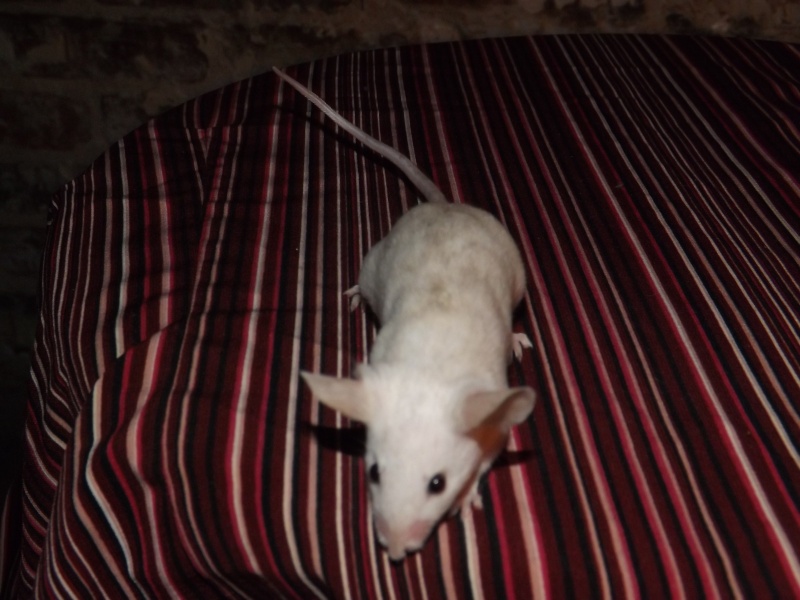 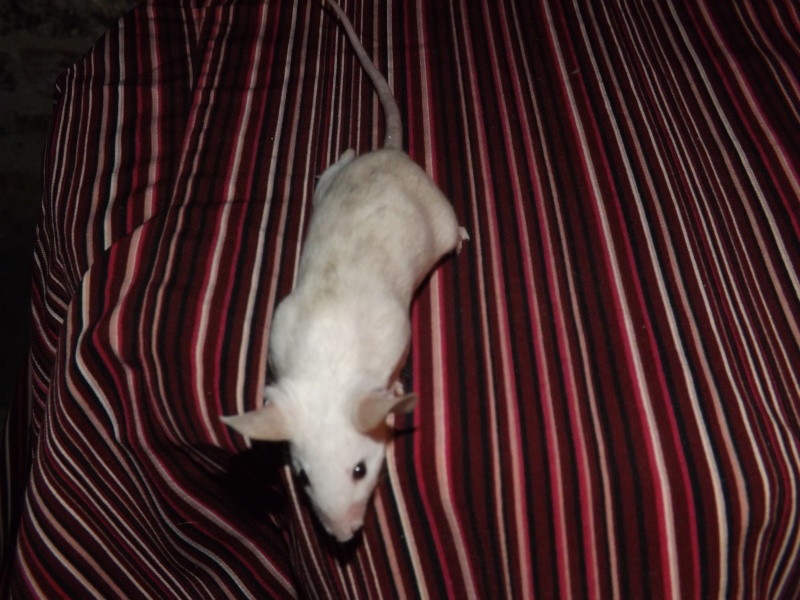 Does she have points too? From these she sorta looks like my Buttercup a little! She was splashed also. Ann is the person to answer your question tho :-)

She looks, in these pix, like a lightly c-diluted chocolate splashed, perhaps c^e/c^e. Did she ever exhibit any true orange?

Mrs. Beach: no, her color has always been what it currently is.

On my screen, her color does not look orange. It looks brownish with brown/black places. She could be agouti chocolate splashed. I do not think she is an A^vy brindle. (Also looks to me like she's being barbered.)

Her mother was a splashed out of a bew distantly related to dexter.
her father is a splashed son out of dexter.

I'm not sure why but roughly 1 out of five of my brindles never put on
weight until they are older.

dexter's grandmother was a empire mouse if I remember correctly.
That's where the gene comes from.
She was orange-er as a baby,but it was sparse compared to the black.

If she turns out to not be brindle, I do have a little fatty from a more recent litter.

I'll try to dig up her baby pictures.

I don't have chocolate here as far as I know.
Since I breed blues, with a goal of blue splashed with these, I avoid it like the plague.

but wow, I was absolutely certain.
She really doesn't look like I remember her.

What was the name of Dexter's grandmother? Some Imperial brindles carry both d and b. Not to stay I'm going to fight for b/b, but if I know who it is, perhaps that will shed some light on the matter.

What c-dilutes are at work here?

I have the pedigree in the file cabinet at home, but I'm in the hospital until tomorrow, so I can't get to it right away.

I dont think it had her name on it, but it does have her gene code and origins on it.

these splashes come from a colorpoint splashed and a set of BEWs originally.
I was trying to get back tricolor lines I had before the fire..but so far they've produced blue splashes, brindles, stone, Burmese and a few others.

c^e/c sounds like the Brindle Empire in 2011! Funny, my memory may be bad, but I don't remember adopting out to you. Did you get her at RF where I sent mice to be purchased by the general public?

Sarah: Wasn't Dexter my Davidito, from me to you via Tara? If so, he was descended from a brindle pied and a fuzzy tri from Casey and was a/a.

Mrs. Beach: Was Rolympcia barbered? Yes. Very perceptive of you

I'm not sure who the culprit is. All 6 does in that tank have been barbered.

Oooo, then at least one has learned the behavior from the original barber! Barbering is a learned behavior so once you get a barber it does not pay to leave it in with your other mice, even if it's "safe" barbering, because the barbering can escalate to breaking skin.

Mrs. Beach wrote:Oooo, then at least one has learned the behavior from the original barber! Barbering is a learned behavior so once you get a barber it does not pay to leave it in with your other mice, even if it's "safe" barbering, because the barbering can escalate to breaking skin.

Oh no! I didn't know they could learn it. The barbering is a recent thing and now that I'm thinking about it, I'm pretty sure the original culprit is Perky, a little blue mouse bred here that I simply kept for sheer cuteness. I need to observe more to catch the other culprit(s). Then what? Isolate them?

Yes. If you have a female barber, you may want to select one cage companion who you don't mind if she gets barbered and learns to barber, too. What is ideal is to pick a larger, dominant cage mate who your barber would not dare to barber! Balance of power, so to speak. It may take some time, trying different combinations. I have a buck who even barbers his huge ASF companion!

She is definitely brindle! She's had her first litter now and I can see their brindle marks coming in

Woo! Woo! You have a non-obese brindle! It happens! Who is her breeder? Perhaps you might let me have a baby doe? Who did you breed her to? [brindle excitement!]

Mrs. Beach wrote:Woo! Woo! You have a non-obese brindle! It happens! Who is her breeder? Perhaps you might let me have a baby doe? Who did you breed her to? [brindle excitement!]

Not only is she non-obese, but her babies have such pretty markings. Her breeder is Sarah [Lycrisa/Shadowrunner] from Ember Falls Mousery. Mrs. Beach, you will be the first one I contact when I am sure about the sexes and know which I'd like to keep. I believe that two out of four of the brindles are does, and that the splashed and white one are does also. But I'm not sure if you'd be interested in them. Their dad is Baron Samedi, Shade's littermate, which means that he is a hairless carrier. Also, two of the brindles and the splashed are rex. Baron Samedi is also the great grandson of one of my original mice from MBBE. I chose him to breed because of his size and temperment and because I thought his being a/a C/c would help sort out whether she was A^vy. 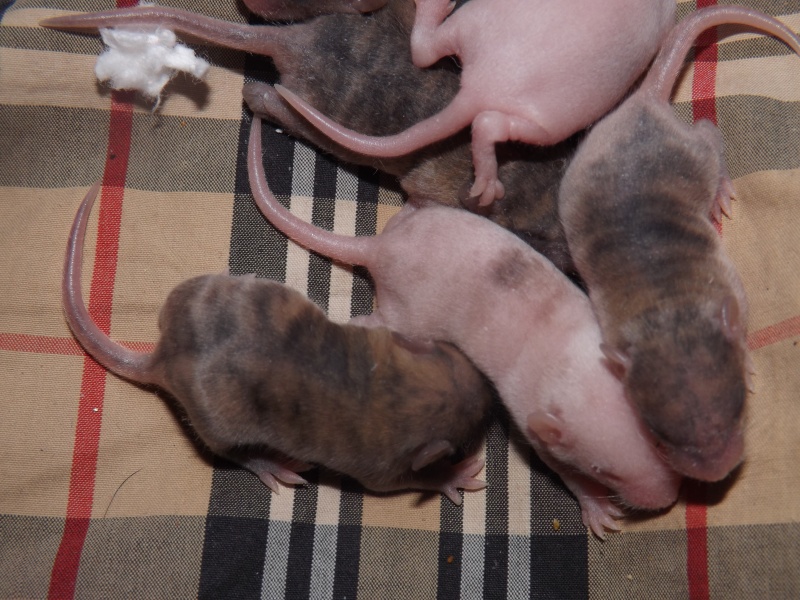 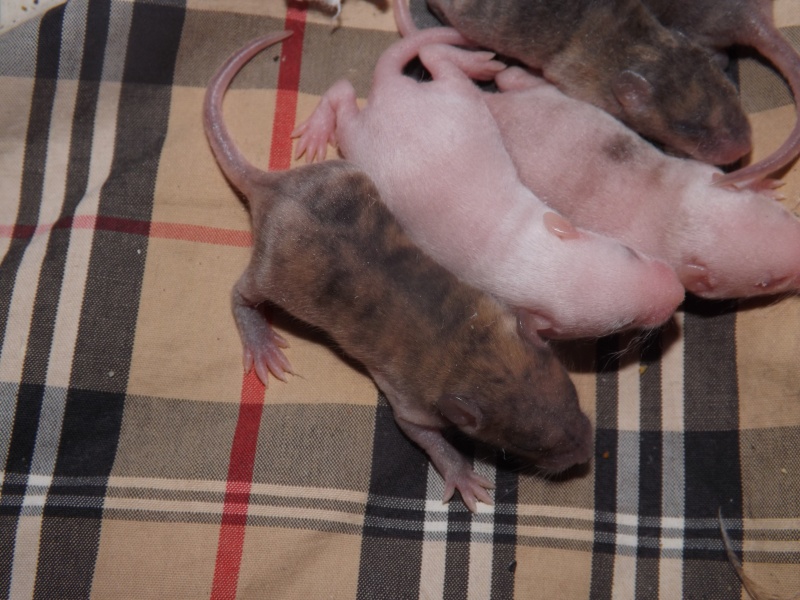 Here's their daddy, Baron Samedi. In this old photo the fur looks crappy around his neck and ears because he was then under treatment for some sort of skin condition he developed after tangling with a wild buck. 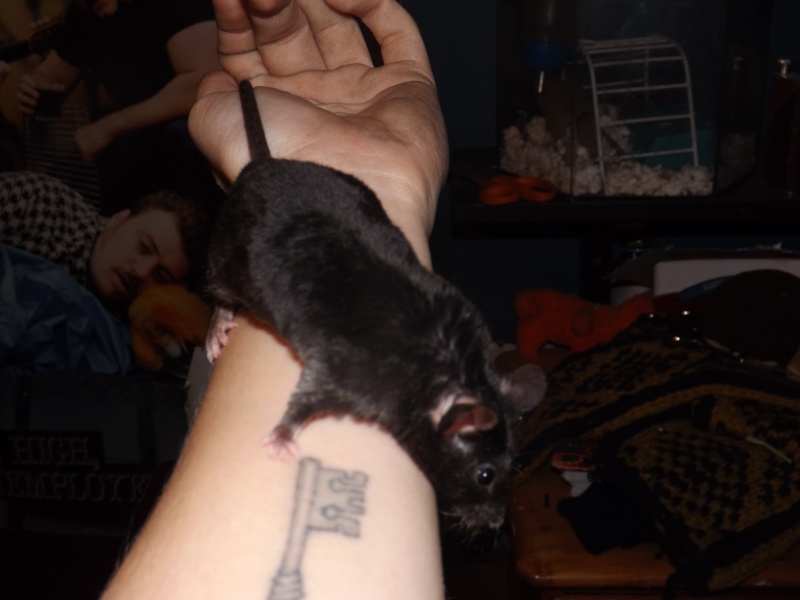 The one baby looks just like a BEW. Any idea what she is genetically?

If the splashed one is brindle, then I'd prefer it, since I am breeding for brindle tris! Your BEW could be c^e/c or a light c^e/c^e. The splashed one is probably, also. Both parents must be some combination of C/c^e and/or or C/c.

Yes, Mrs. Beach, you may certainly have the splashed brindle if you'd like

When you say the BEW could be c^e/c or c^e/c^e, do you mean in combination with a/a or A^vy? I don't know about the c-diultes in the brindle splashed mom, but dad is definitely C/c.

Madmouse, thank you! I would like her if she has proven herself to be truly non-obese by the age of three months. Is that possible?
a/a mice would be or appear BEW with c^e/c or c^e/c^e. A^vy would be pale-ish yellow with black eyes. Not sure what A would look like, but pretty much BEW. I include c^e/c^e, which is usually beige, because the hue of c-dilutes is variable and you can get a very pale c^e/c^e which appears white.