Hi, my name's Kerry. I live in Pittsburgh, PA.

I've always wanted pet mice, but have always lived with at least one cat from the time I was born until a year and a half ago... So, I ran out and got myself two mice. Then, felt so bad about leaving the third all alone at Petsmart that I had to go back and rescue her two weeks later. They're "special..." One of my girls has since passed, but the other two are rearranging the bedding in their tank as I type.

When I called the pet store to ask if they had any mice (not wanting to drive all the way out to find another tank filled with 30+ PEW feeders), they said they had just gotten three in a few days ago, but they were keeping them in the back room and they wouldn't be available for adoption for a few days.

So, we waited a few days and drove up to get them. Browsing the rodent tanks, we didn't see any mice and asked one of the girls working there, who walked us off of the floor into a holding room in the back while explaining that the mice were jumpers and had escaped a few days ago, leading the employees on a store-wide mouse hunt. The girl cringed as she opened the drawer they were in with some bedding, food, water, and a plastic igloo, and admitted that they scared her. All three immediately dove in different directions, but we managed to keep them from jumping out. She went on about how the last few batches of mice they'd gotten in were jumpy and scared of people and only cared about escaping. I was definitely intimidated, but decided I was going to do what I set out to, and told her I'd take two of them. The idea of trying to control all three of the crazy tiny buggers at once was too much, so I left one behind.

They behaved exactly the same for a week or two before beginning to chill out. Feeling a little assured and very guilty, I went back to get the third.

Needless to say there were many escapes early on, but they eventually came around (for the most part). The tamest one, Lola, passed one month ago today. She was the only one I'd say actually liked me, and was at home on my shoulder, hiding in my hair. The girl we left at the pet store by herself for two weeks, Grizelda, can be very skittish, but once I have her in my hand she's pretty calm, and allows me to pet her. The other girl, Mayhem, is a bit nuts, always doing her own thing, never satisfied with the coffee table, always trying new ways to get onto the floor, doesn't like being petted, but isn't afraid of anything. Escaped a few weeks after we got her, and we spent a good hour tearing my living room apart looking for her, before I finally looked up, and saw her tail hanging over the top of my curtains a foot from the ceiling...

Love my mice, and dare I say they've even come to like me in their own weird way... But I feel sorry for them, and for the conditions they must have been in before I got them. Dreading the day when I'm left with only one mouse, and where I'm going to get another baby or two to keep the lonely survivor company. Don't want to support the horrible "breeders" who supply pet stores with their profits, or the pet stores who deal with them. Don't want to feel so badly for my pets. Looking for alternatives, hence my joining here.

Sorry for the long post. Guess I should get to bed now! 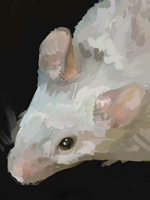 Hi! Welcome! I am a breeder in Baltimore and excited to tell you if you are willing to take a road trip there are breeders all around east Maryland and Pa and even some in Ohio. It will all depend on what variety you are interested in.

Hello! I'm glad to hear you weren't discouraged from mice by your experiences with petshop mice. Candycorn is right- there are several good breeders within a few hours drive of Pittsburgh that can help you find tamer, more loveable pets.

candycorn wrote:Hi! Welcome! I am a breeder in Baltimore and excited to tell you if you are willing to take a road trip there are breeders all around east Maryland and Pa and even some in Ohio. It will all depend on what variety you are interested in.

Yeah, I've seen the breeder list on here, lots of breeders pretty close. I travel around Ohio and Eastern PA sometimes, so I'm thinking next time I'm in one of those areas I might make a few investments... And we might be going to Maryland in the next few months.

Though my main priority is healthy, happy mice, I've been looking through the different varieties that are out there, and the merles and bridles are very pretty, and the texel babies are ridiculously cute.... Though you can't go wrong with simple black or silver plain coated mice...

madmouse wrote:Hello! I'm glad to hear you weren't discouraged from mice by your experiences with petshop mice. Candycorn is right- there are several good breeders within a few hours drive of Pittsburgh that can help you find tamer, more loveable pets.

Not discouraged at all, and couldn't possibly love any mice any more than these guys... They do have very big "personalities," which just makes them 20x more entertaining. Really, they get along okay. They have fun, and if they don't like me so much as like using me as a bridge to walk across etc., they sure do like each other. They like to hang out with me when I drink my coffee in the morning. It's just a little upsetting to me that May is so opposed to being petted, and Grizelda will freak the hell out sometimes when I walk into the room in the dark as quietly as possible, running all the way from the top level all the way to the bottom level, skidding into walls etc. to escape the Giant Fox in the room... I generally try to let them do their own thing, just hang out as opposed to actually try to play with them or anything like that, since input from me is generally just stressful to them. I've had them for 14 months and they're still not completely used to me, though I try to interact with each of them every day if I can, so how bad must it have been for them before they got to me to do permanent damage? I'd assume it's half nature half nurture...

Granted PetSmart does seem better than PetCo as far as rodents are concerned, and they don't seem to have any serious health issues, aside from being somewhat on the portly side. My Lola passed after fighting a rather large tumor... ):

But I don't want to see any mice I get in the future deal with unnecessary stress caused by bad breeding or prior treatment , especially stress related to myself.

Half nature half nurture is definitely right! It sounds like the supplier has some serious temperament issues. At least in my area, the supplier is the same for PetSmart and PetCo (these days), though one chooses to only offer same-sex mice. Getting mice from an actual pet breeder outside the mass market is definitely the way to go if you're wanting to avoid health issues and get friendlier mice. The petshop mice I've had have varied pretty greatly in temperament, as have the show mice I've gotten, but pet-focused breeders seem to always have the friendliest mice. It's easier on them and on you, plus you're not supporting the nasty mass market breeder companies and their practices.

Hey! I'm in Silver Spring near Washington, DC, but sometimes I visit where I grew up near West Chester, PA (25 miles west of Philly). I breed very friendly mice and would be happy to adopt some out to you.