Hubby and I rescued and handraised a kitten 2 months ago and he just got neutered a couple days ago.

Well, upon getting him back not only did I noticed that they'd hacked off the end of his ear, but I also discovered that they'd almost SPAYED him!!!

They shaved his belly and it looks like they started making the incision to "spay" him, but stopped after about half an inch, thank God!

Thankfully, Porkee doesn't seem to even notice that anything happened and is acting perfecting normally and running around, attacking everything in sight, and making funny chirping noises like he always does.

I think I remember them sometimes having to make a small incision to neuter a male cat, since it isn't as "cut and dry" with out feline friends. I could be completely wrong though. It's been a LONG time since I watched surgeries at the animal hospital I used to work at. Lol.

But they cut off part of his ear? What the heck?

I know that it common practice to snip off the ear tip on feral cats that are going to be released back outdoors, to identify them as neutered or spayed. Was it a vet or clinic that handles feral cats in a trap-neuter-release program? Maybe they got him mixed up with a feral that was going to be spayed.

My coworker had her male cat "spayed" they started a spay and realized that he was not a she. He had an incision that was stitched up, but this happened many years ago. Her kitty was fine

I've heard of vet clinics that automatically cut off part of the cat's ear if they know it is a rescue and will be adopted out. I'd be pretty ticked off though..

They better not have billed you a dang dime. I would be furious.

Yeah for cat neuters now they make a small incision in the scrotum only. Cats can heal at an alarming rate. The clinic owes you an explanation at the very least, someone should get fired over that bad of a screw up.

My friend works at the local humane society and she took him in with the shelter cats to be neutered(they take them to Toledo once a week), so I can only assume that they go him mixed up with the feral/shelter cats, which is why they hacked off the end of his ear, but that doesn't explain why they started to SPAY him!

Also, I got 4 other cats fixed through the same place(2 girls and 2 boys) and they didn't cut any ears off then, so it really bothers me that they cut the ear off my poor little boy.

After all he's been through he didn't deserve that.

Unfortunately, the neuter was pre-paid, but my friend made sure to give them an earful on my behalf. >

Were both of hs testicles descended? I have a boy whose testicles were undescended (both of them) and they had to make an incision like a psay to get them out. This was the the first one my vet had seen with both undescended in about 15 years!
As far as the ear, the clinics that do surgeries for TNR tip the ears. I don't know of any "regular" vet that routinely does this in my area anyway.

I bet they got him mixed up with a feral female - tipped his ear and started a spay before catching that he was a boy, not a girl. Glad your friend gave them an earful 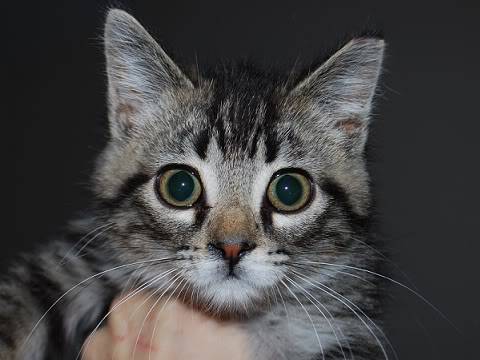 The incision where they started to "spay" him 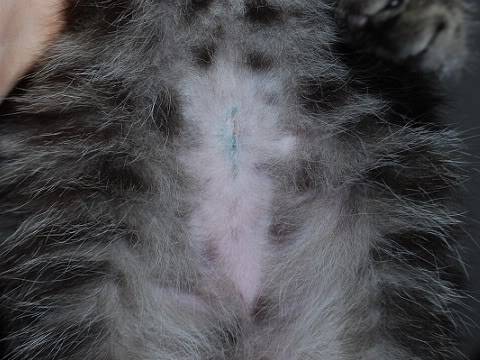 And what explanation did they give for this?

I spoke with my friend about it and it turns out that he'd been transferred into a live trap at the shelter(BEFORE going to the spay/neuter clinic), which resulted in them thinking he was a feral...

I asked why he was put into a live trap and she said they put the cats into live traps specifically so that the clinic will consider them feral because the clinic does cheaper neuters/spays on ferals.

Had I know all of this ahead of time I would have GLADLY paid more money to ensure that he did NOT get his ear chopped off and that he was treated with more care and respect, thus not resulting in an accidental spay!

It really bothers me that the clinic isn't showing poor ferals any respect and is just hacking away at them simply because they don't think that anyone loves or cares about them enough to see if the proper surgery was done... I feel really sorry for all of the ferals that go through their clinic and have suffered the same things that my poor Porkee has gone through.

I'll bet if Porkee had arrived at their clinic in a normal crate he would have arrived back to me in one piece and his belly and ear would have been left untouched...

No idea why they'd start a spay on him......but the ear thing is normal for ferals...that way it can be told if they've been spayed or neutered if they get trapped again just by looking at an ear. Much less stressful and time consuming to be able to tell in the trap when if they are tipped, they can just be rereleased, then if they have to take them in again

Yeah, I totally understand why they would tip the ear on a feral and I can understand now why they cut Porkee's ear. It just bothers me that it didn't NEED to be done. It's not the clinic's fault for the ear tipping, because they didn't know any better since he arrived in a trap. I just wish I would have been informed ahead of time so I could have paid whatever the normal price is to make sure he DIDN'T have his ear cut. I thought I WAS paying the normal price...

Yeah....something similar happened with my cat...she didn't end up tipped though...and is a girl...so she was supposed to spayed...lol when I brought her to the low cost place they didn't say anything wierd...just took her with her collar on and everything...when I got her back her collar was off...and when I asked they said it was b/c they sent her to a vet that only did strays....

I can understand and appreciate that people are being kind and trying to save us money(like my friend and the place that you took your kitty to), but I just which they would inform us on what exactly that saved money is really costing us! *sigh*

Yeah...once I found out I was pretty ticked...b/c I imagine it would be really easy to mix them up once they have NO IDENTIFICATION!...

Wow- yea I would be pissed!! It is normal for ferals to get their ear tipped but there is no excuse for not checking the sex of the cat before the surgery!

Btw- he is so freaking cute!

Is porkee the one in that photo I love? The food-faced monster photo?