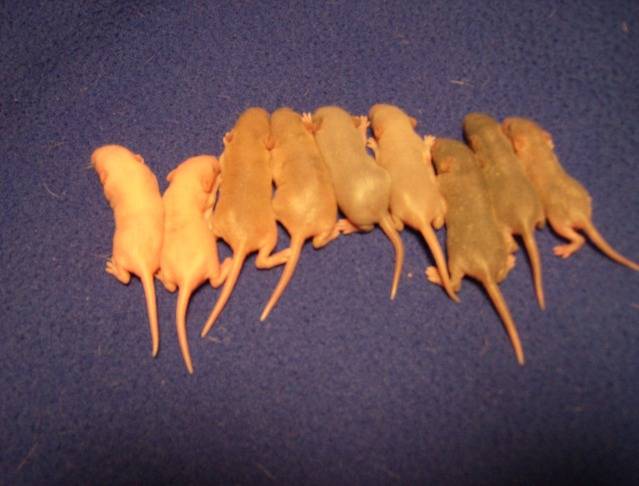 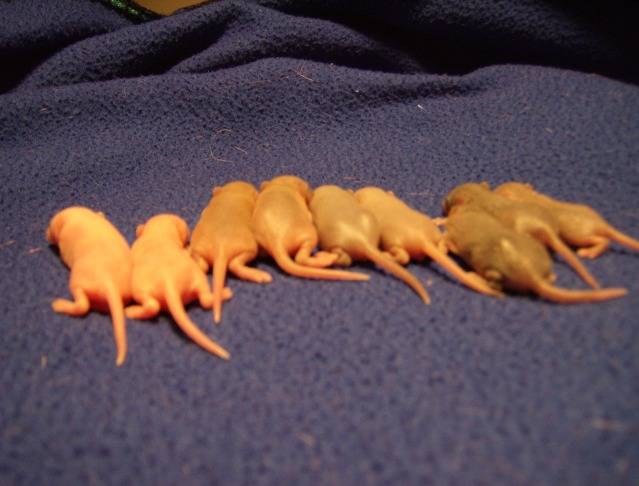 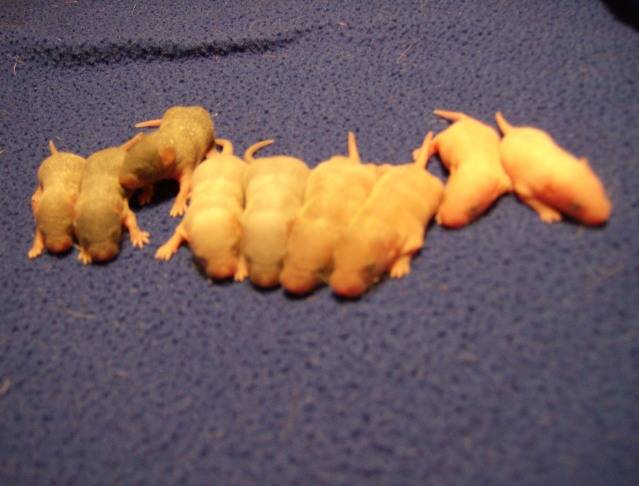 C dilute guesses:
-In the first pic, on the far right I imagine I have three black foxes (a^t/a c^ch/c^ch).
-To the left of them are certainly two blues, one of them darker than the other, so maybe one is a/a d/d and the other is a/a c^ch/c^ch d/d.
-To the left of them are two brindles, one of them orangeybrownish and the other grey. I think the orangeybrownish brindle is c^ch/c^e (I've seen this shade before) and I think the grey one is c^ch/c^ch (what I'm breeding for!). How exciting!

Help!:
-On the far left are two PINK bubs! One has brindle stripes and one has not. What the hell are their c dilutes???? Even a c^e/c^e brindle has very faint stripes that I think would hardly show so well this early. I know I should be getting 25% satin and that satin colors come in much later. I know there is recessive s and that there are high white k factors in this particular s. That would explain the BEW, but how about the one with dark brindle stripes!

Culling advice sought:
I need to cull tonight. I think my best choice is the two black foxes on the far right. They are smaller than all the others. If the PINK one without stripes is not going to be brindle, pfui! It goes, too! I'm not breeding for blue or for black foxes (although I love the way black foxes look and I've never had one before), but I bet I could sell them easily enough. People are often looking for chinchilla. OR would it make the most sense to cull all the babies except the three brindles so they can get optimum nutrition? (Or should I wait a while?)

I've culled now both pinks, the lighter blue fox, and the medium black fox. The smallest one (black fox) looks peculiarly mottled. Could it be an under-splashed or overmarked c^ch/c^ch brindle? Even though I wouldn't breed it because of its size, I'd like to see what the colors look like.

Thinking now I shouldn't have culled that lighter "blue" in case it was an undermarked c^ch/c^ch brindle. Oh well! 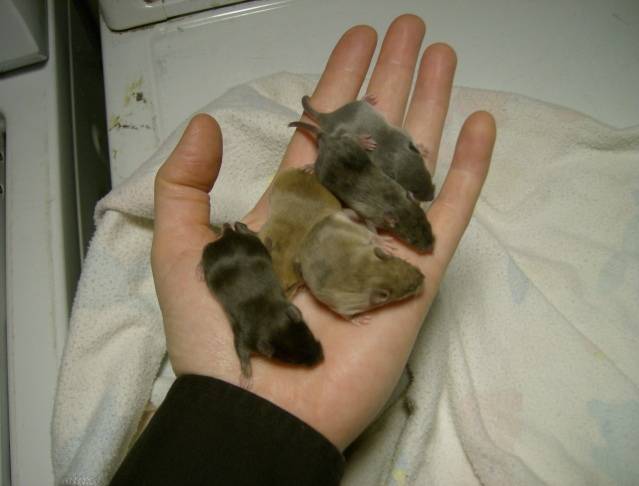 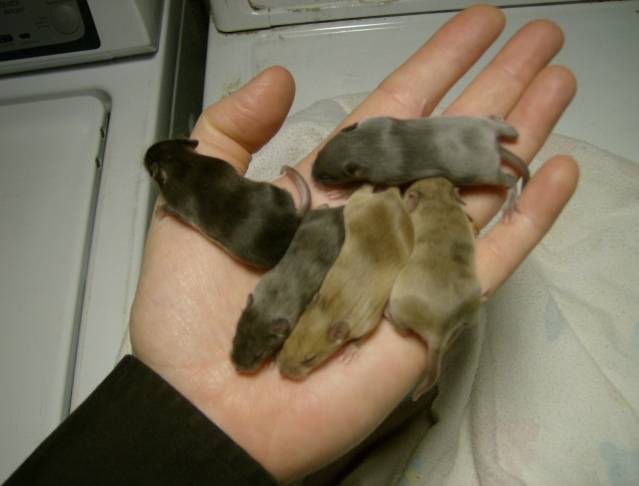 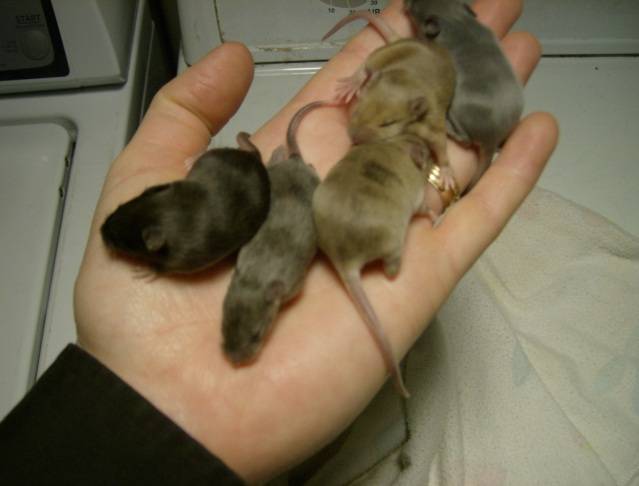 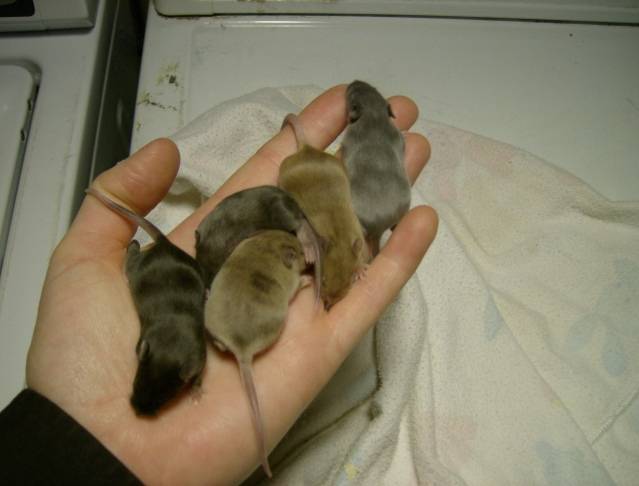 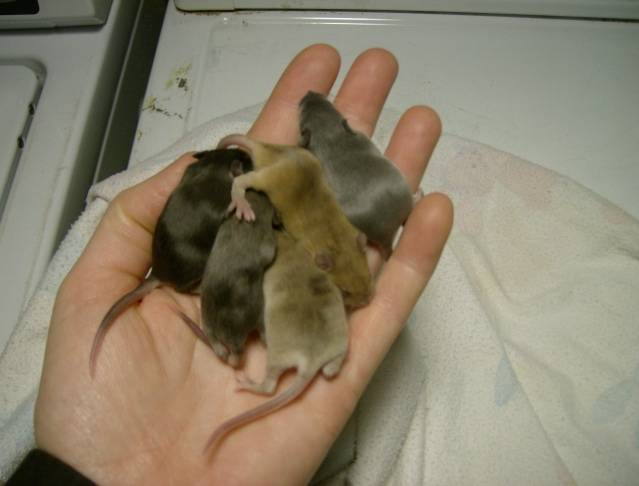 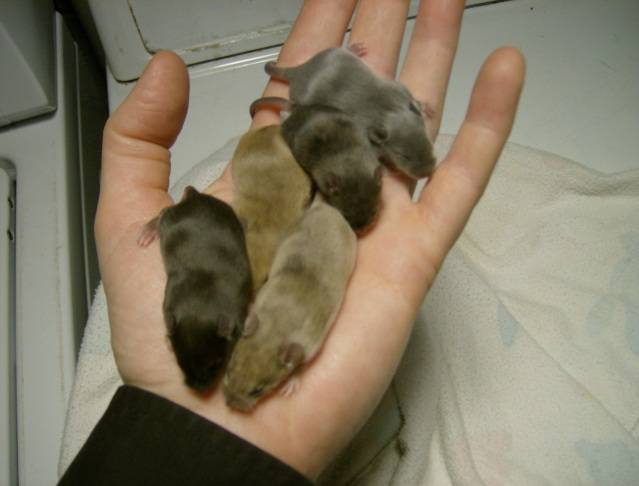 -There is a nice blue...fox! Doe.
-The darkest one is actually splashed mock chocolate (c^ch/c^e)...fox! Buck.
-The second darkest one appears to be c^ch/c^ch brindle, possibly splashed...fox! Buck. He may even carry s. He's the closest I have ever gotten to my breeding goal, and he's the runt, darn it, but only three grams lighter than the three lightest siblings. If he grows up nice and strong, since I'll be crossing in typey mice, would it be OK to breed him?
-There is a greyer brindle with a patch of stripes on its right waist. It appears to be c^ch/c^e. Buck.
-There is an oranger brindle, undermarked. This entire litter is some combination of c^ch/c^e x c^ch/c^e. I do not understand how this brindle can appear orange, unless it is a combination of the variability of c^ch/c^e and A^vy.

All are fat, healthy, and snuggly. 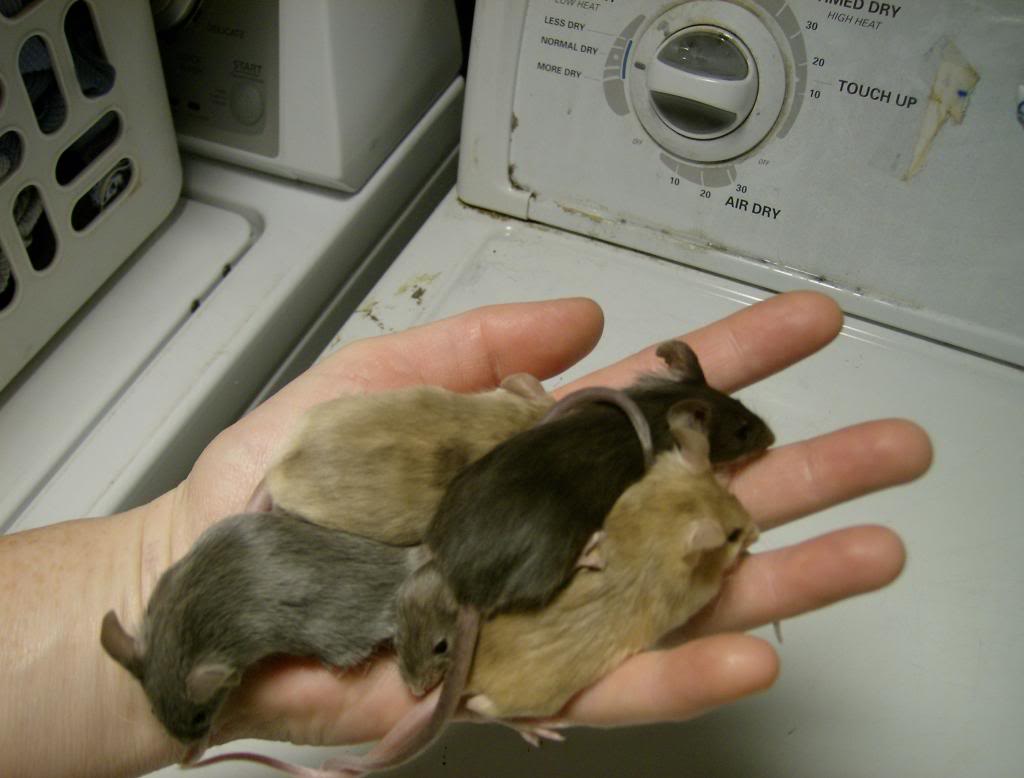 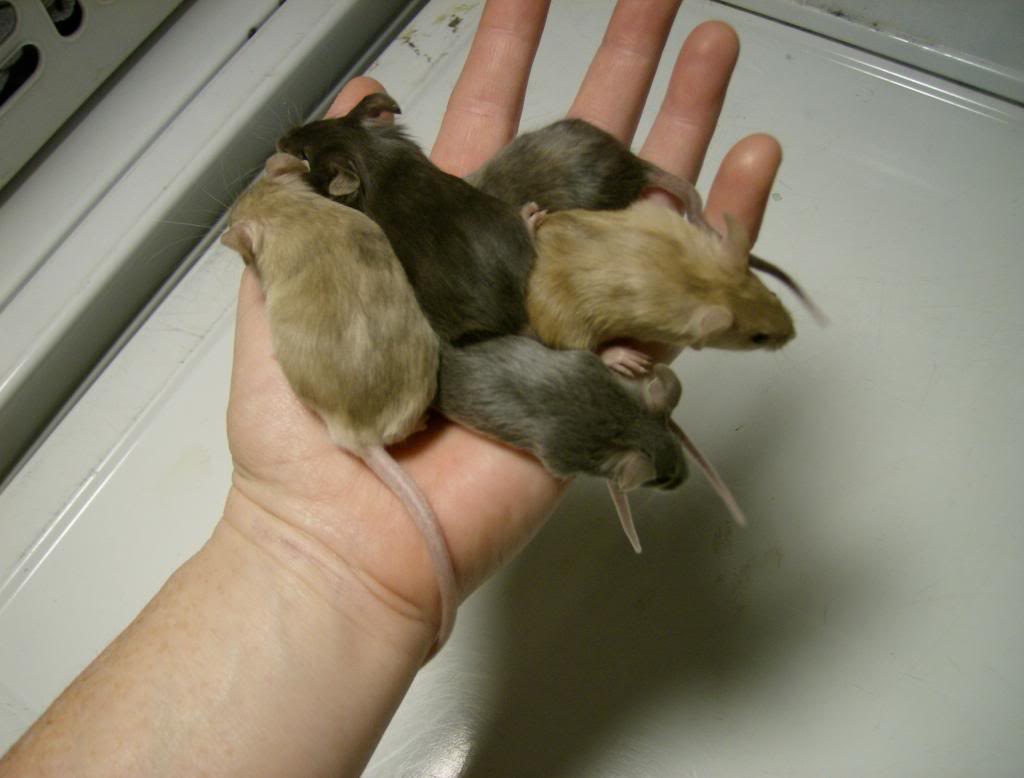 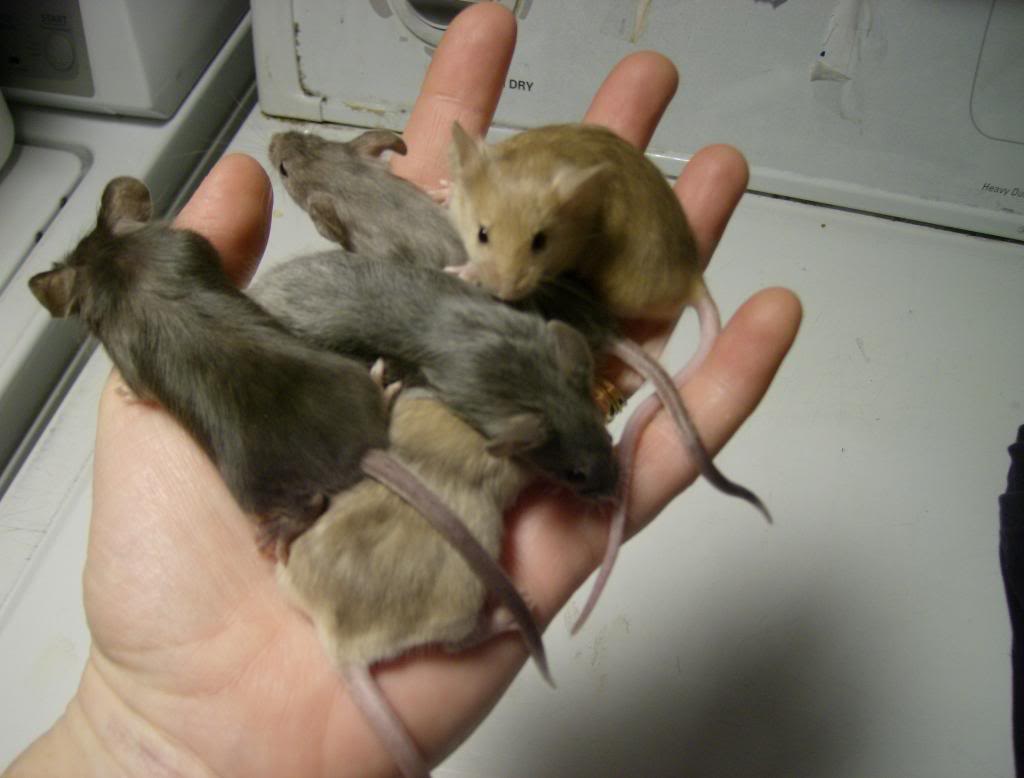 The blue fox appears now to be agouti! 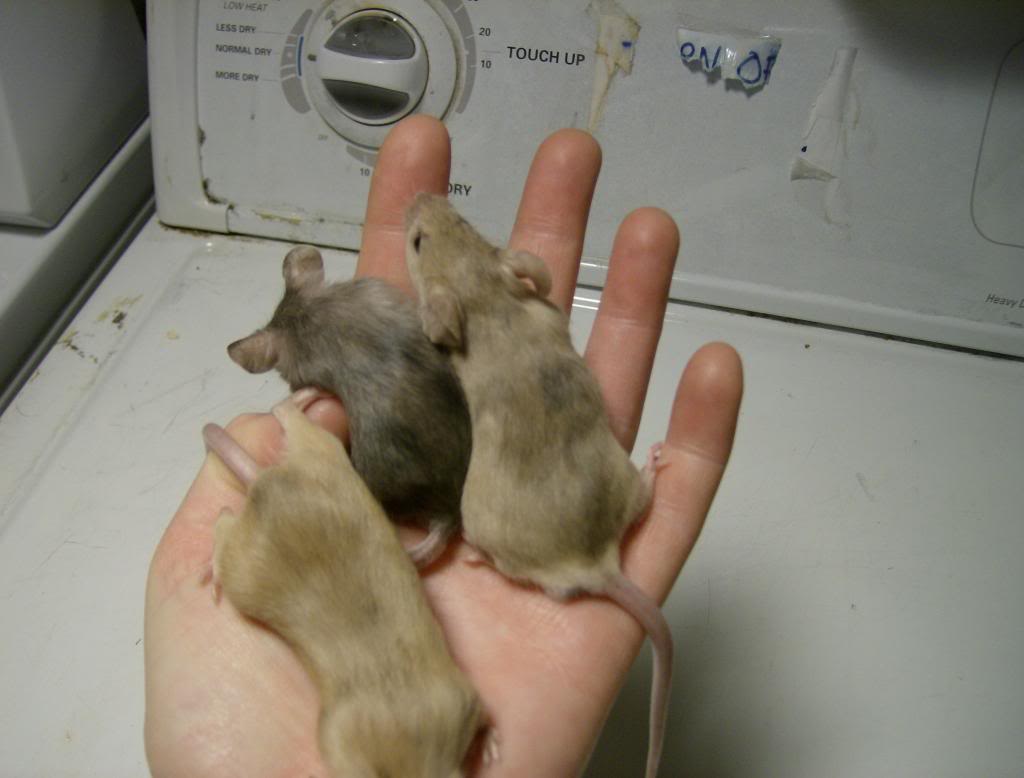 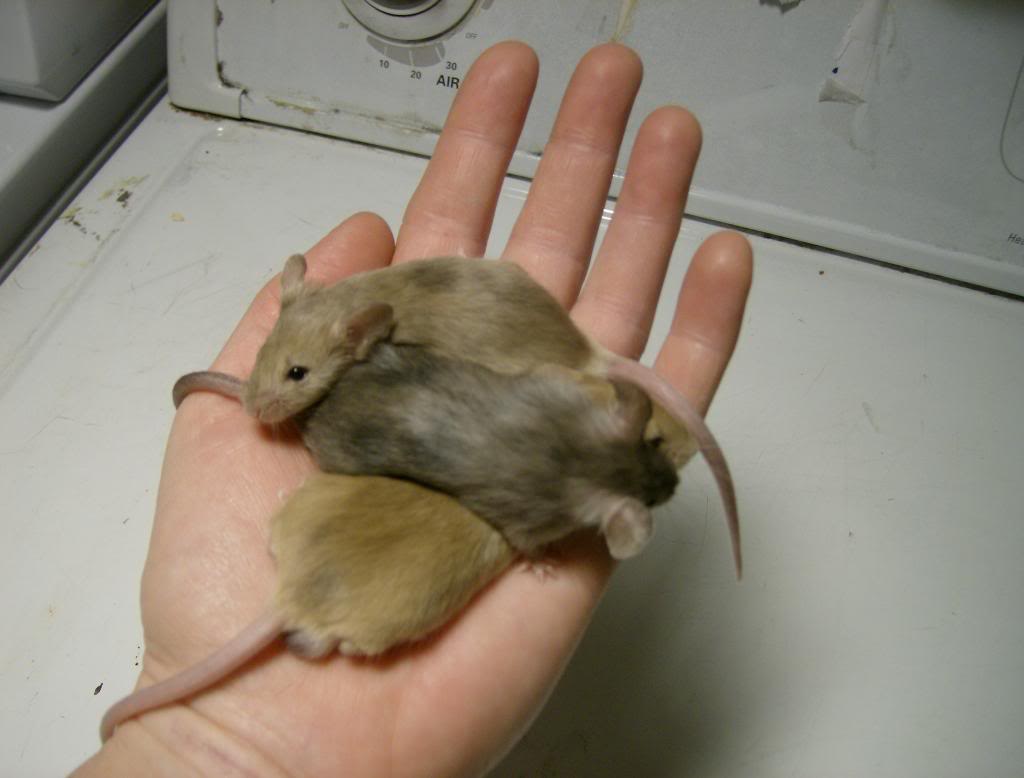 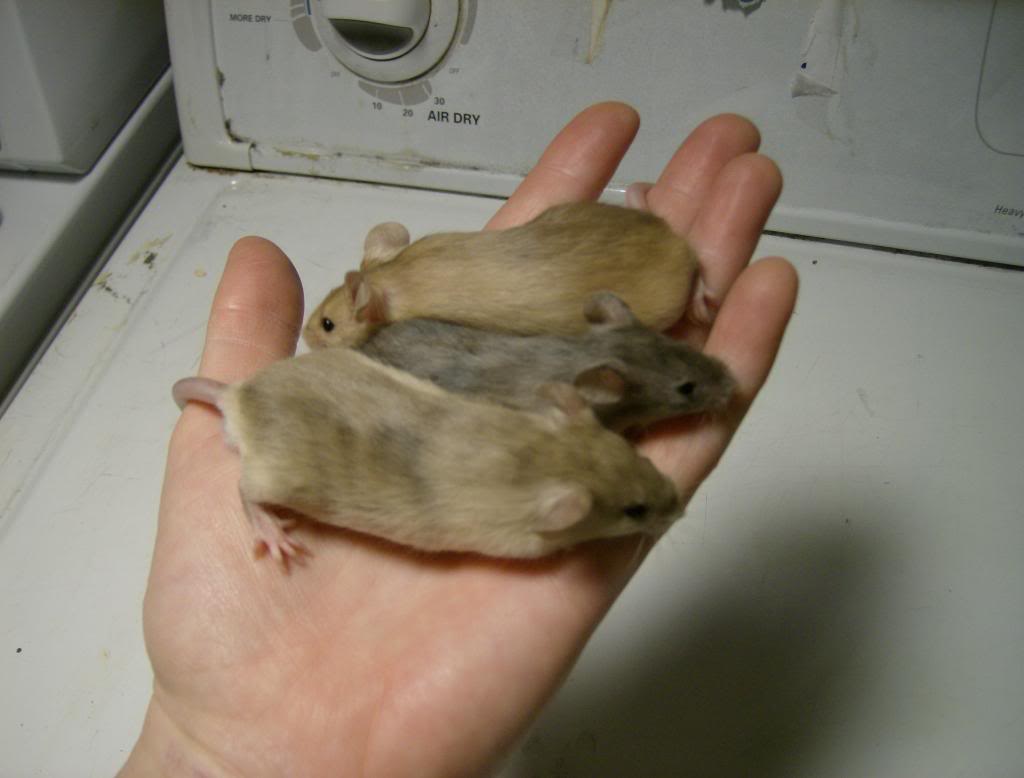 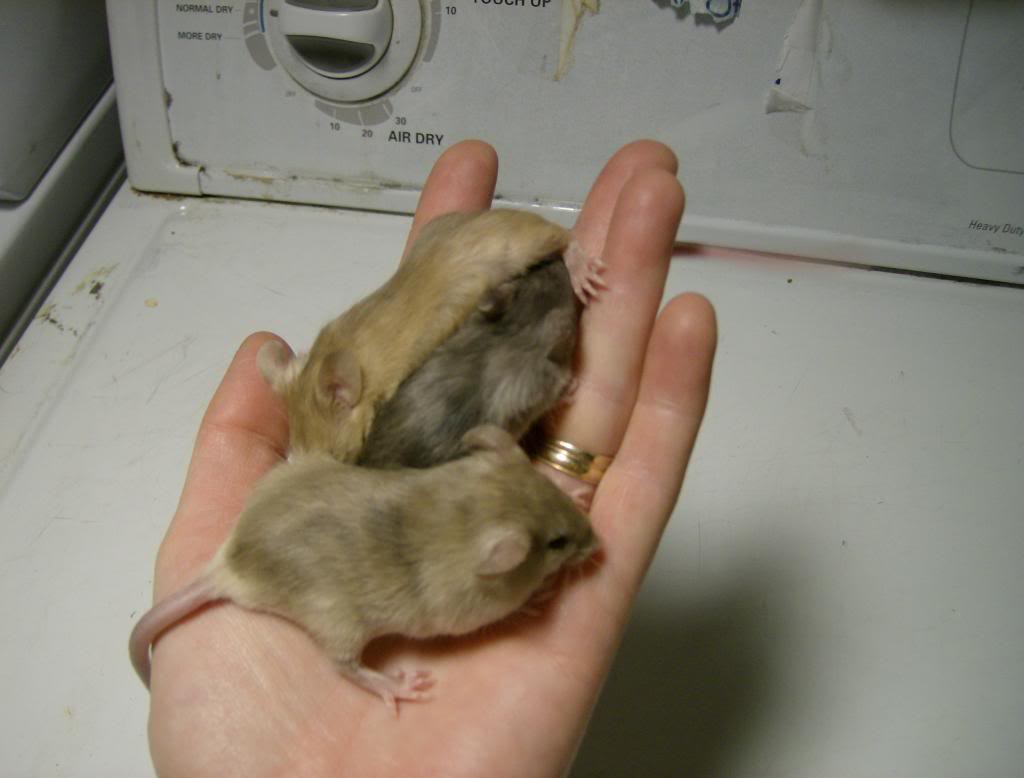 Would love to hear people's ideas about genotypes now that they're almost grown.

I've no ideas, but I do think they're a lovely, squishy piled of loveliness.

I like the combination of colors, kind of like metal colors, but not shiny. Brass, lead, pewter, etc.

They would make good names Mrs. B! My favorite of the three brindle's is the little dark one. What a looker

Wow they are gorgeous Mrs. Beach!

Yes, I am partial to the dark one, too, though I am not sure he's a brindle. He should be obese by now. If he were a brindle, he'd be c^ch/c^ch, which is what I'm trying to breed. He has until the end of three months to become obese, though, so I'm waiting. He's very handsome even if he's something splashed. Exactly what splashed I could not say!

For being so small starting out, that burmese fox sure did well! I'd not be as concerned about breeding a slightly small buck as I would a doe, since bubs seem to get most of their size from mom rather than dad.

Thanks for telling me that, L!